In the second part of our series, I've written about the threads that run through the COVID-19 pandemic, the Black Lives Matter movement, Pride Month, and the HIV/AIDS epidemic that devastated the LGBTQ community in the 1980s and 1990s. The virus was insidious, difficult to track, and had a disproportionate impact among LGBTQ people, particularly gay men. But gay men weren’t the only one who were sickened and killed by the disease in the face of government inaction.

Decisions about whether to research HIV/AIDS and fund a cure were implicit decisions about the value of LGBTQ people and the lengths that our government would go to protect them. Indeed, the budget for researching a cure for AIDS was a fraction of what the government spent on diseases that were much less deadly by all accounts.

Medical progress is good, but history shows us that medical advances don’t reach everyone equitably. Diseases affect black, brown, and white Americans differently, and many systemic, structural, and latent but determinative factors explain this disparity. This is evident in COVID-19, and it was true of the AIDS epidemic as well. Throughout the 1980s, particular symptoms surfaced in women that were thought to be linked to the AIDS virus, but the CDC made no significant effort to include these symptoms in its definition. By the end of the 1990s, women contracted the disease at faster rates, and over half of them were women of color.

It took Katrina Haslip 15 months to tell anyone that she was living with AIDS. She was an incarcerated person, convicted after supporting herself as a sex worker in the wake of two marriages that left her in deep poverty. The correctional facility where she was serving her sentence failed to contain an outbreak of HIV, and Katrina slept listening to others die in their cells. Tracking the spread of any disease requires patients to come forward and to tell those who might be at risk, but this can be a scary, stigmatic thing to do. For women, this was an even more terrifying prospect because of the relative lack of support networks and information about AIDS specific to the experience of women.

While she was still at Bedford Hills Correctional Facility in New York, Katrina founded AIDS Counseling and Education (ACE) to help incarcerated women living with AIDS. After 66 months in prison, she became an AIDS educator and an advocate. She spoke at conferences, provided peer mentorship, and directly confronted public health officials. She lost her life at age 33 – just one month before the CDC announced an expanded definition of the virus to include women's symptoms. Her work added hundreds of women to the national case numbers, making them eligible for federal relief and treatment. 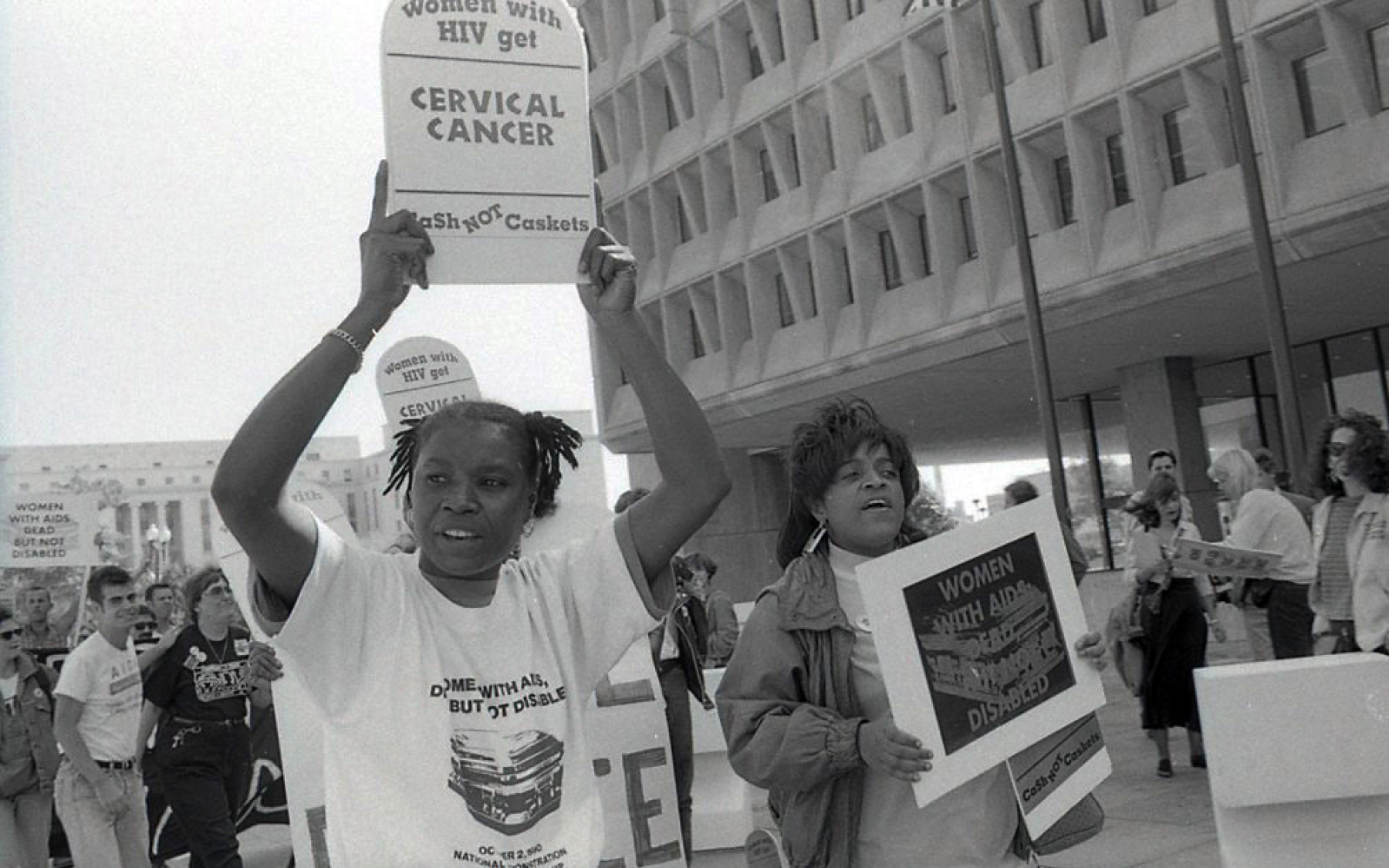 Katrina Haslip (pictured left), carries a sign drawing attention to the unique ways in which women are affected by HIV/AIDS.

Katrina Haslip's role in fighting for AIDS patients was in many ways forward looking; while the AIDS epidemic was characterized by its impact on the LGBTQ community, Black women comprise 61% of new cases today. But information on the disease specific to the symptoms of Black women remains under researched, underrepresented, and underfunded. The movement to stop the spread of AIDS is better for Katrina's work to bring more people into it. The lesson from her work is that power comes from taking up others' fights as our own, but also seeing the differences in each others' pain and fighting like hell to be counted.

"I am, and have been, a woman with AIDS, despite the CDC not wishing to count me,” she told The New York Times, one month before her death in 1992. “We have compelled them to."