State Senator Julian Cyr secured $53 million in funding for Cape Cod and Martha’s Vineyard’s important regional infrastructure projects on Thursday in the Senate Capital Bond Bill. Cyr presented capital funding proposals including $6.5 million to construct a new building for the Barnstable Regional Government and Cape Cod Commission, $1.6 million to fund improvements to the Hyannis National Guard Armory, $1.75 million to be used for improvements to the Dukes County Jail and House of Corrections, $2 million to extend the Cape Cod Rail Trail to Wellfleet Center and lengthen the Provincetown bike trail, and $150,000 to connect a municipal water main to a parcel on Highland Road in Truro. Senator Cyr also secured $41 million for the construction of a science building at Cape Cod Community College.

The Year in Review

From the moment I was sworn-in as your state senator, I have worked tirelessly to crisscross Cape Cod, Martha’s Vineyard and Nantucket meeting with constituents, non-profits, business owners, advocates, volunteers and elected officials to help solve problems and discuss how to improve our quality of life. I have convened and participated in Town Halls on Martha’s Vineyard, Nantucket, Mashpee, Orleans, Wellfleet and Hyannis on issues ranging from Housing, Renewable Energy, Seniors, Opioids, to Small Business, Tourism and Climate Change.

In the recent state budget, I delivered funding for key Cape & Islands programs... 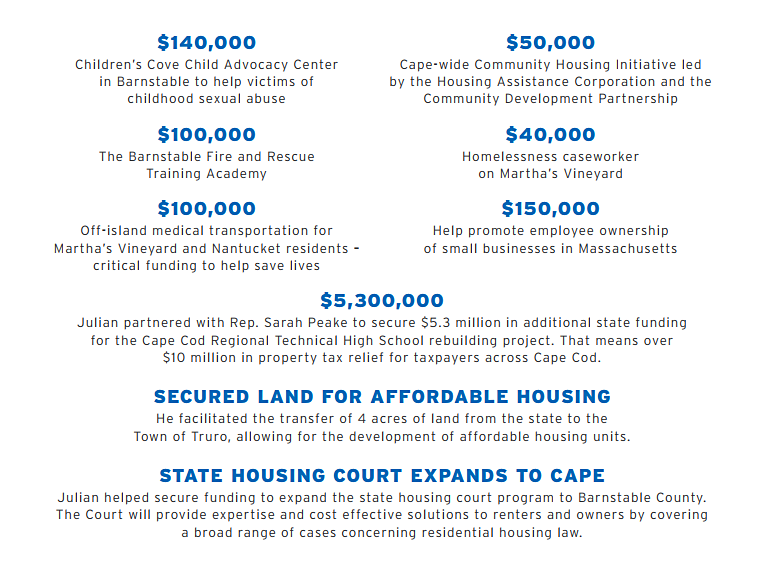 On November 14, the Massachusetts Senate voted 27-10 to enact H.4009, An Act advancing contraceptive coverage and economic security in our state, better known as the ACCESS Bill. The bill had been restructured in October with a compromise between legislators, the Coalition for Choice, and a group of Massachusetts insurance carriers – who now vocally support the legislation. The same bill was passed in the House and Governor Baker signed the bill into law on November 20.

Filed in early January, the ACCESS Bill was viewed as a safeguard and a worst-case-scenario bill to shield women in Massachusetts from regressive healthcare-policy rollbacks at the Federal level.

A sense of urgency to pass the ACCESS Bill was renewed with Congress’ summertime attempts to repeal the ACA, and was even further stirred by the Trump Administration’s contraceptive-coverage rollback in early October. An emergency preamble means that this bill will take effect immediately.

The benefits of contraceptive care are immense and well documented.

As cited in the legislation’s review by the Mass. Center for Health Information Analysis, benefits of contraception include: “improved women’s health and well-being, reduced maternal mortality, health benefits for mother and child associated with spacing pregnancy, female workforce engagement, and economic self-sufficiency.” The review estimated meager premium hikes of $0.07 to $0.20 over five years, costs that would be mitigated by savings derived from preventing unintended pregnancies.

I am proud to sponsor S.2201, An Act relative to an arts license plate, which aims to showcase the work of Bay State artists and create a stable revenue stream for the Massachusetts Cultural Council. This bill would make an arts license plate available for a fee of $50, with the design provided by a council-run artist competition and the money directly benefitting the council. These plates will allow residents to express their pride in the state’s renowned art scene while also supporting it financially.

Massachusetts is renowned for its vibrant arts community, and many contemporary artists are able to create and inspire thanks to funding from the Massachusetts Cultural Council. I have a deep personal connection to the arts, as my involvement with the Nauset High School Select Choir shaped my high school experience and led me to get involved in local politics for the first time to fight for the jobs of the school’s arts teachers. The arts have benefitted countless others in similar ways because of their unique ability to inspire complex ideas and emotions and bring diverse groups of people together in a community.

On November 9, the Massachusetts State Senate voted to bring the Commonwealth one step closer to more affordable, accessible, and high quality health care. The Senate adopted an amendment sponsored by Senator Julian Cyr (D-Truro) that charges the state with measuring the impact a single-payer system would have on the cost and delivery of health care in Massachusetts. The amendment was adopted as part of a larger health care reform bill under consideration by the Senate.

“The drawbacks of our fragmented healthcare system are increasingly obvious,” said Senator Cyr. “Quality of care is stratified, coverage and cost vary widely, and uncertainty in the marketplace causes real anxiety for families and small businesses. The current sick-care system has neglected many and, worse, costs more than anywhere else in the world. We can’t wait. This amendment moves the ball forward on transitioning Massachusetts to a single payer system in a real and responsible way. Once again, Massachusetts leads the nation on health care for all.”

Last night, the Massachusetts Legislature became the first state in the nation to ban bump stocks, devices used to turn ordinary rifles into automatic weapons. The ban on bump stocks was included in a budget deal reached between the House and Senate that includes more than $129.3 million in spending, including language to increase the state’s contribution to the building of a new facility for Cape Cod Regional Technical High School, increasing the state’s contribution to the project by $5.3 million. The additional contribution from the state will save Cape taxpayers nearly $10 million when taking into account the interest that would accrue to the towns. A district wide election on October 24th overwhelmingly approved the building project.

“Bump stocks and trigger cranks effectively change the nature of a semi-automatic weapon to make it into a machine gun.  There is no legitimate purpose for the use, sale, and possession of these devices other than to cause as much damage as possible,” said Senate President Stan Rosenberg (D-Amherst).  “Taking this action today protects public safety, provides ample time for residents to comply, and establishes sufficient penalties for violations.”

“Today Massachusetts became the first state in the nation whose Legislature has banned the sale and use of bump stocks,” said Senator Julian Cyr (D-Truro). “These devices should not have been legal in the first place. I am proud of the bipartisan conversations that the Senate led to ensure today’s action is responsible and does not reap any unintended consequences.”

Today the Massachusetts Senate passed by a vote of 27-10 a comprehensive criminal justice reform package that updates decades old criminal sentencing laws to improve outcomes of our criminal justice system.  Among the provisions included in the bill are repealing ineffective mandatory minimum sentences for low level drug offenders, reducing and eliminating over burdensome fees and fines, reforming the bail system, allowing for compassionate release for infirmed inmates, and reforms to the juvenile justice system.

Senator Julian Cyr (D-Truro) sponsored two amendments that were included in the final version of the bill approved by the Massachusetts Senate.

One amendment aims to secure equal protections for lesbian, gay, bisexual, transgender, queer (LGBTQ), intersex, and gender non-conforming prisoners by ensuring access to healthcare providers with expertise in transgender health care and creating a special commission to study the health and safety of LGBTQ, intersex, and gender non-conforming prisoners in Massachusetts.

Senator Julian Cyr (D-Truro) testified today before the Joint Committee on State Administration and Regulatory Oversight in support of Senate Bill 1690, An Act relative to government efficiency. The bill is aimed at encouraging state government to apply behavioral science when designing and implementing policy, programs, and initiatives to improve government efficiency.

The field of behavioral economics has recently been in the headlines; Richard H. Thaler, the founder of the field, was awarded the Nobel Memorial Prize in Economic Science on Monday, October 9th. Readers may be familiar with Thaler’s work through Nudge, a best-selling book he co-authored with Cass Sunstein in 2007.

Senator Julian Cyr (D-Truro) has introduced a piece of legislation aimed at increasing the accountability and efficiency of theNuclear Decommissioning Citizens Advisory Panel. The 21-member panel, created in 2016 by state energy legislation, is intended to provide citizen input into the closure and decommissioning process of Pilgrim Nuclear Power Station.

“Pilgrim Nuclear Power Station is one of the greatest public safety threats facing Cape Cod, Martha’s Vineyard, Nantucket, and all of Eastern Massachusetts” said Senator Cyr. “I represent – and live in – communities that would be disproportionately affected in the event of an incident at Pilgrim. Responsible closure and prompt decommissioning of the plant is essential, as are regulations that ensure a safe and responsible decommissioning.”

The Massachusetts State Senate voted yesterday afternoon on a supplemental budget to close out Fiscal Year 2017 and enable the state to pay some of its outstanding bills, including $49.8 million for snow and ice removal and more than $20 million for state sheriffs. The supplemental budget also includes language to increase the state’s contribution to the building of a new facility for Cape Cod Regional Technical High School, increasing the state’s contribution to the project by $5.3 million. This additional contribution from the state will save Cape taxpayers nearly $10 million when taking into account the interest that would accrue to the towns.

“This measure will save local taxpayers millions of dollars and help our communities finance the proposed $128 million Cape Tech project,” said Senator Cyr. “I am proud to be a part of the collaborative work has been done to ensure high school students on Cape Cod have access to high quality and innovative technical education.”

“The Massachusetts School Building Authority can now reopen the determination of the state’s contribution to the Cape Tech building project and use the highest year when calculating the “proportion of economically disadvantaged students” in the district, thus increasing the state’s contribution by 5.67 reimbursement points for the project,” said Representative Peake. “The state will now pick up 51.12% of the eligible costs, where they would have previously only carried 45.45% of the eligible costs.”